The Way to Happiness

Citizens Commission on Human Rights (CCHR), a nonprofit charitable mental health watchdog organization established by the Church of Scientology in 1969, is dedicated to eradicating psychiatric abuses and ensuring patient protections. CCHR has supported enactment of more than 160 laws protecting individuals from abusive or coercive psychiatric practices, requiring informed consent for psychiatric treatment, ending enforced drugging and electroshocking of children and mandating severe penalties for sexual abuse of patients by psychiatrists and psychologists.

CCHR distributes documentary films that expose the varied channels of psychiatric abuse: the destructive consequences of screening and labeling individuals and prescribing psychotropic drugs; the profit-driven alliance between psychiatry and the pharmaceutical industry; the lack of science behind psychiatry’s diagnoses; and the proliferation of drugging of active-duty military and veterans that is driving up noncombat deaths by sudden cardiac arrest and suicide.

From the Scientology Network

BRINGING PSYCHIATRY UNDER THE LAW 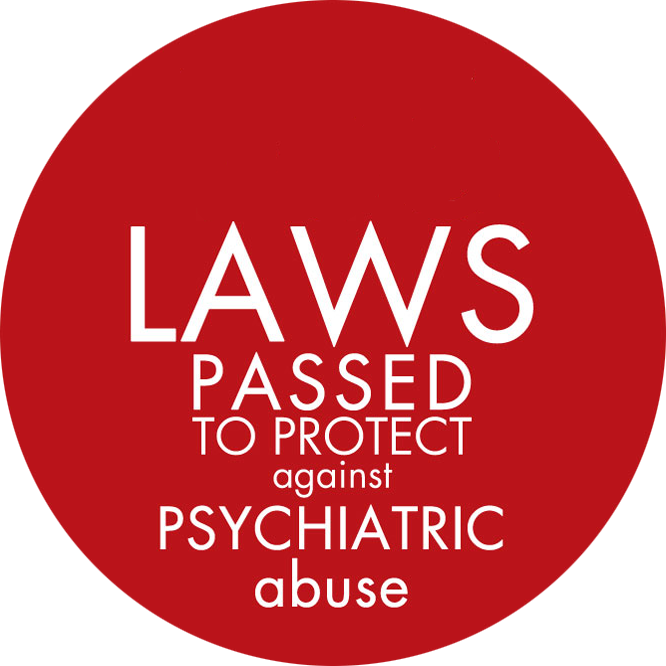 As a key element of its humanitarian mission to protect individuals from psychiatric abuses and to clean up the field of mental health, Citizens Commission on Human Rights members work vigorously to ensure that the legal system serves all citizens—including those caught in the undertow of psychiatry.

In that pursuit, CCHR has contributed to the passage of more than 160 laws in states across the United States and 16 nations. Legislation ranges from protecting children from psychotropic drugging, safeguarding the elderly from abusive treatment, stopping psychologists’ and psychiatrists’ sexual abuse of their patients, defending the rights of the disabled and mentally ill, and requiring psychiatric transparency as a safeguard against fraud and corruption. CCHR members have testified before the United States Congress and Parliaments in Japan, France, Holland, Germany, South Africa, Italy, and many more, steering legislation in the direction of defending dignity and saving lives.

“CCHR serves as a stellar example of the united power of individuals who achieve reform through dedicated efforts to better society and effective education and advocacy.”

“I join with Congress in recognizing the Citizens Commission on Human Rights for its longstanding commitment to advancing the fundamental freedoms set forth in the Universal Declaration of Human Rights and the Nuremberg Code. CCHR serves as a stellar example of the united power of individuals who achieve reform through dedicated efforts to better society and effective education and advocacy. We recognize CCHR for the many great reforms it has championed, which today protect individuals against cruel, inhumane and degrading treatment and for its leadership role in raising public awareness so that dignity and human rights can be returned to all men.” —Member of U.S. Congress, California

How valid are psychiatrists’ diagnoses—and how safe are their drugs?
REQUEST